My Best Friend Killed Me or HOW to Kill your friend the right way!! 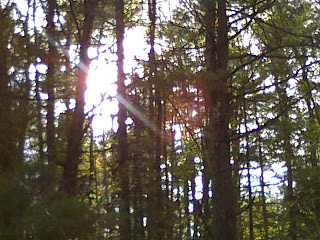 To avoid getting in trouble at work one of my best friends said that I died, now this did get her out of trouble at work but not with me.  At first I was like You did what? and I was kind of upset but then I thought whatever but then I had a thought "please tell me you did not make me die of cancer" the phone grew silent - she did it, now I am not happy apparently I died on the operating room table, which is probably how I will go no time soon at all thank you!!  So this is where my bitch is ....
IF you must kill your friends how about letting them have some fun in the process?   What about skydiving, slipping into a volcano in Hawaii, run over by a charging bull while participating in a bull run, heart attack while having sex.  Or how about at least interesting you could try they died in a car chase after running a red light, their stalker caught up with them, they were rescuing a snail from the 3rd rail.  Come on people this is a friends life let them die with some dignity and intrigue.  Make it worth their while, they gave up their life for you!
Some of my personal choices if you must kill me again would be..........
Out for a ride and fell off the back of boyfriends motorcycle and landed on head dying instantly.
At an Aerosmith concert and Steven Tyler falls off stage crushing me to death, however this one led to a better way for me to go.
Died of a heart attack while having sex with Steven Tyler.  (and could we make him a little younger while we are at it?).
Drowned trying to save an otter.
Choked on a Zotz.
Swept off to sea.
I love you Nikki - good luck trying to never mention me again at least you live in another state from me now so that does make it easier, otherwise there would be mass hauntings.
Posted by Nyla at 6:21 AM No comments:

ok so I have a few X-Husbands.....
Phil I was married to for about 7 year,  we are friendly with each other and talk on FB it is nice.
Joe the love of my life after 15 years of marriage had the strangest mid-life crisis I have ever seen.
Then there was the violently abusive #3 who on my birthday sent me an e-mail saying Happy Birthday and a few niceties (this is the only way he can contact me) I previously had my cell turned off and got new service cause I was sick of waking up to pictures of his "stuff" in my face.  This seemed to be different and there had been no porno picture emails, so I gave him credit for being kind and sending me the email when my sister did not even bother to tell me happy birthday.  What a friggin' mistake that was, cause apparently this morning 2 days after thinking maybe he has come to his senses what do I get but porno pics of him in e-mail.  What is with that shit?  Men just so you know most women although we enjoy sex and what you do with it, we do not find it attractive to look at, and especially if you are not our husbands/boyfriend or lover whatever the case may be. and after you have sent a woman an e-mail saying "send me a picture of your big titties" (sorry I don't normally talk like that - they are not my words) and if you have sent similar messages 5 or more times and we don't respond to it, it does not mean send us a picture of you close up and naked!!  You know I don't know what happened but I sure did not marry the man he turned out to be.  But I sure as hell divorced the man he turned in to. The man I loved did not really exist (another thing you men should know just be yourselves pretending to be what you think or know we want and not being who you really are will only make BOTH of you miserable!) Back to topic........
Unless a woman asks you for a picture of you naked or you are both "playing" on the phone don't send us close ups of your stuff.  Also I might add people that move 1000s of miles away from you probably really don't want to see that shit anyway!!
Enough said?
Posted by Nyla at 5:30 AM 4 comments: 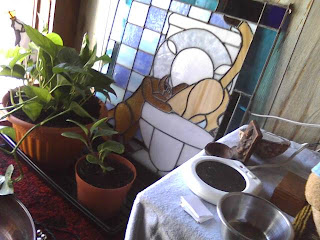 Well hmmmm......... Ramblings         Well here we go!
Ok mindless banter here we come......
Could someone tell me why Blogger always puts the wrong time on my blogs?  And while I am bitching about that why is it that I can't get the gadget that is on my other blog threw Blogger on this blog,  I really would like my Oscar Wilde and Edgar Allen Poe gadgets on this blog!!!
Why is it that the nice kind man that lives down stairs from me who wrote me a love song and would treat me decent, why is it that he does not interest me beyond a friend?  Oh wait I can answer that cause he has no real job and goes to meetings every day so I guess the real question is are there any single men that don't have problems with alcohol left out there?  I don't even go to bars so where do they come from?
And why can't I have a cat in my apartment hell if you can smoke you should be able to have a small pet.  Smoke causes about the same or more damage than many small animals would to apartments.
ok heres a good one - why do I still have artist block?????
ok done for a little while
Posted by Nyla at 4:22 AM No comments: 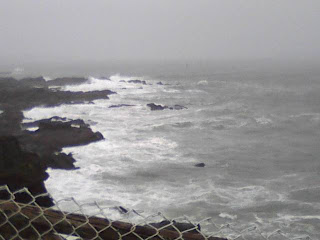 Email ThisBlogThis!Share to TwitterShare to FacebookShare to Pinterest
If on a clear day you can see forever, this is how far you can see on a horribly stormy day at Cape Elizabeth, Maine.
Its my birthday well was my birthday, had nothing to do so I drove all the way across 2 states to go to Portlandhead Light house then to eat lobster dinner after. I owe some serious Karma for my meal of death. got home after midnight. Pretty sucky Bday but what the hell I got some cool ocean and lighthouse picture is a storm and I got to eat 2 lobsters and steamers! OK I took one crustation buddy home with me. Going to watch a movie on NetFlix hmmmmm what should I watch? Well since I watched all of Weeds already I will go with another of the DeZpiX Dead Like Me. My pic for the night would be "What Lies Beneath" with Harrson Ford and Michelle Phiffer (sp) great movie if you have not seen this movie you need to its great! Okz off to watch a movie.
Posted by Nyla at 2:08 AM No comments:

Ok So WHY Steven Tyler or HOW?
Well I have alway had a thing for guys that look like him married a couple too.  LOL.  Anyway after all the BS that I have been through now it is a bit different.  Steven Tyler is my inspiration - he is the Phoenix no matter how hard he falls, no matter how far he falls, even into the depths of hell he always climbs himself out of the ashes to rise again.  And that is why he helped me get through some of the worst BS that life can give you!  That and he is pretty sexy too!!!!
Posted by Nyla at 11:17 AM No comments: 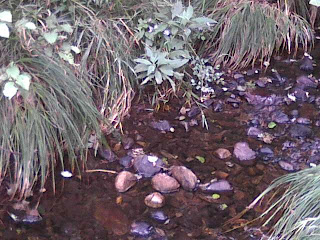 °ThE SoFt AsYLuM Of JiM MoRRiSoN..°